One of the perks of being a wedding and engagement photographer is that sometimes I get the opportunity to travel outside the Greater Toronto area for a destination photo shoot. I love the GTA but, it’s always nice to escape the city and take in new sites to refresh the mind and invigorate the soul. 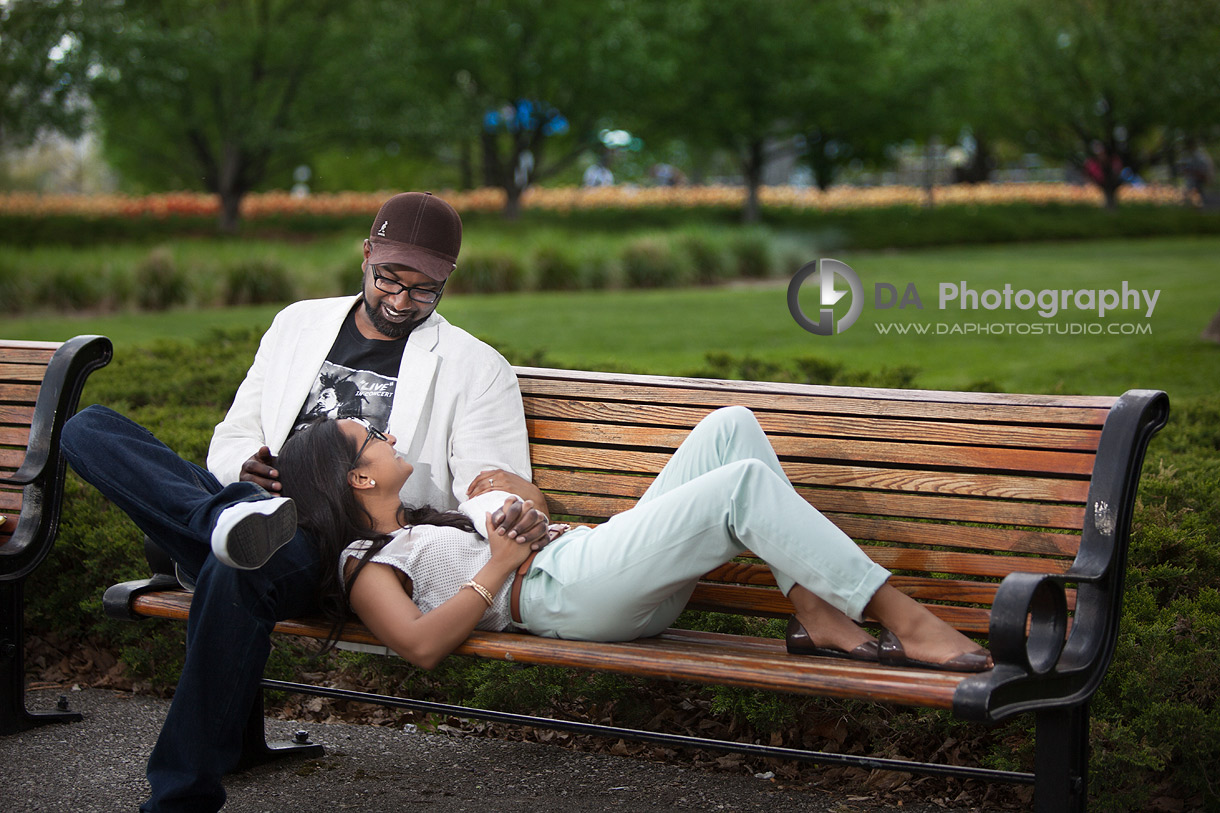 When Aneidah and Anson asked me to be their engagement photographer, they had their hearts set on photographing in Ottawa for their photo shoot. Ottawa is such an inviting city with plenty of access to culture and less hustle and bustle than it’s counterparts, Toronto or Montréal. A few years back I visited Ottawa as a tourist, to check the place out. My visit there wasn’t long, my wife and I had just enough time to do some site-seeing and move on to Quebec City. This time however, I explored the city thoroughly! We traveled along the Gatineau River, took photos with City Hall in the background and spent plenty of time in stop and go traffic while trying to avoid construction in the city — so much for a scenic, invigorating drive! 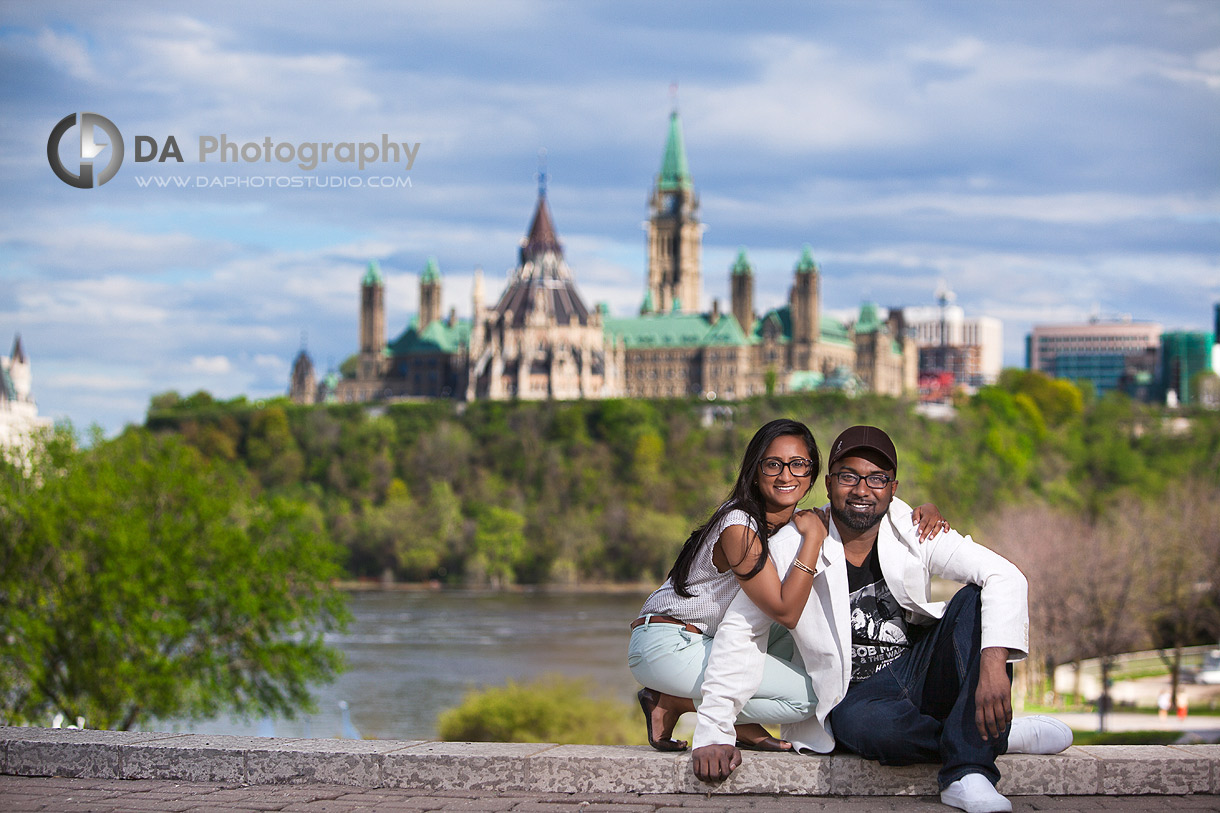 When shooting for a destination wedding or engagement shoot, I always do my research before I go. Usually though, the couple has been to the destination of choice and has already made up their minds as to what locations they want to be photographed at. Perhaps they met and their relationship blossomed at University in another town or maybe they want to re-visit the spot where he proposed marriage on the beach in Maui. Aneidah and Anson’s story begins with Aneidah going to school in Ottawa. During her time there, Anson told her he wanted to move there with her. She was unsure about that since he didn’t have a job lined up, but Anson insisted he could work selling cars… and he did! Ottawa holds a special place in their hearts because of this. 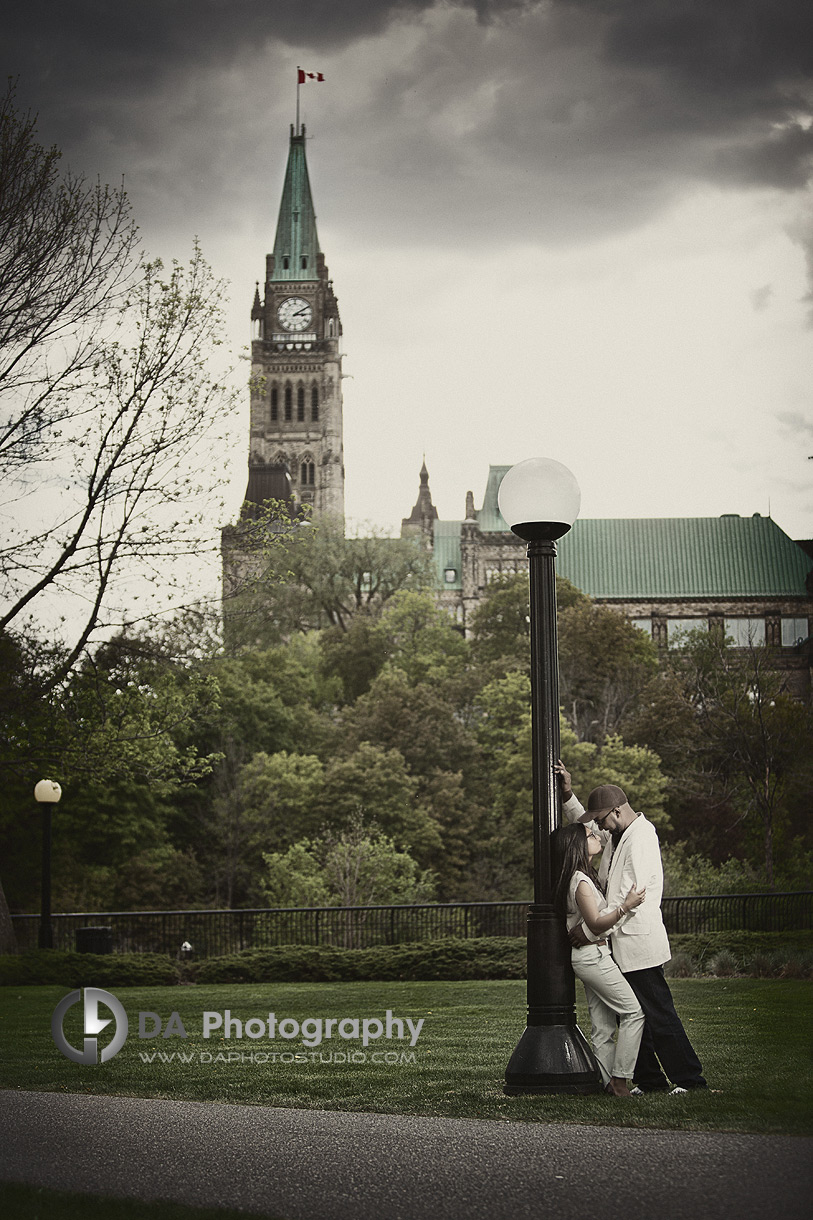 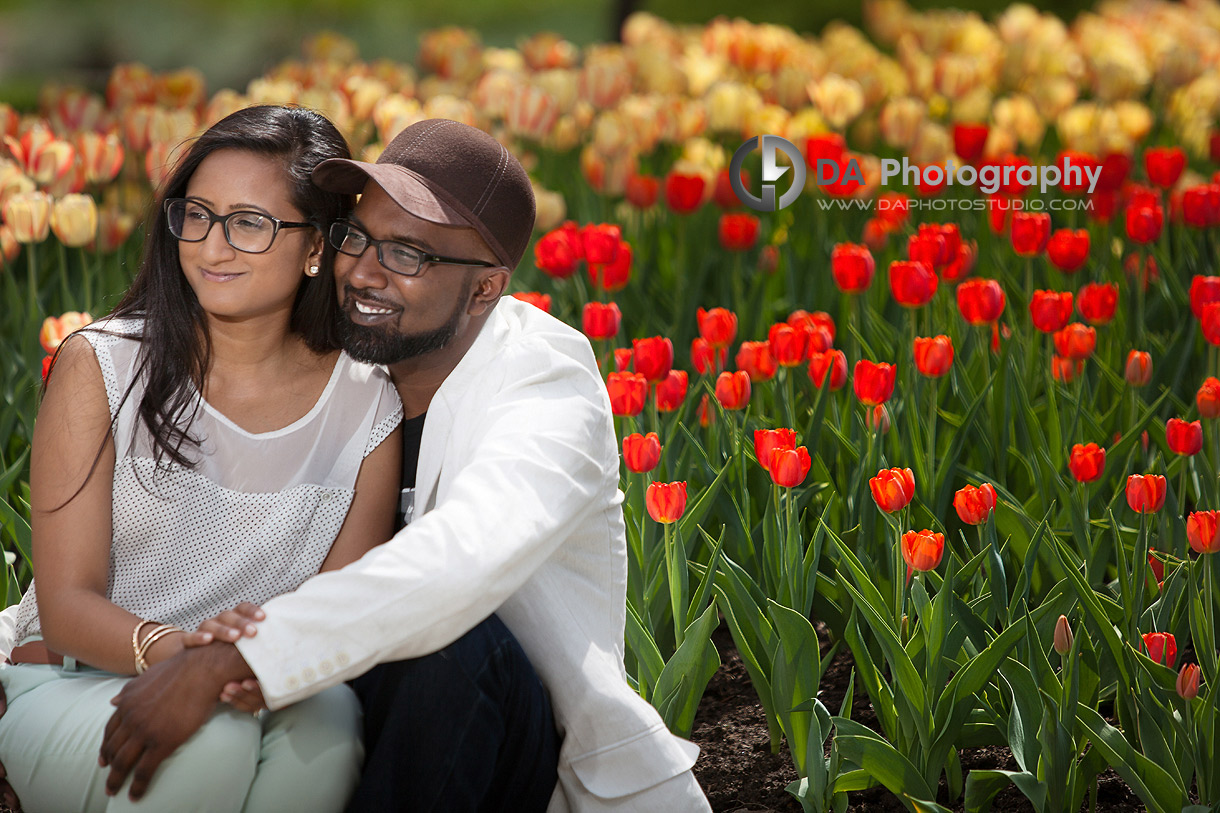 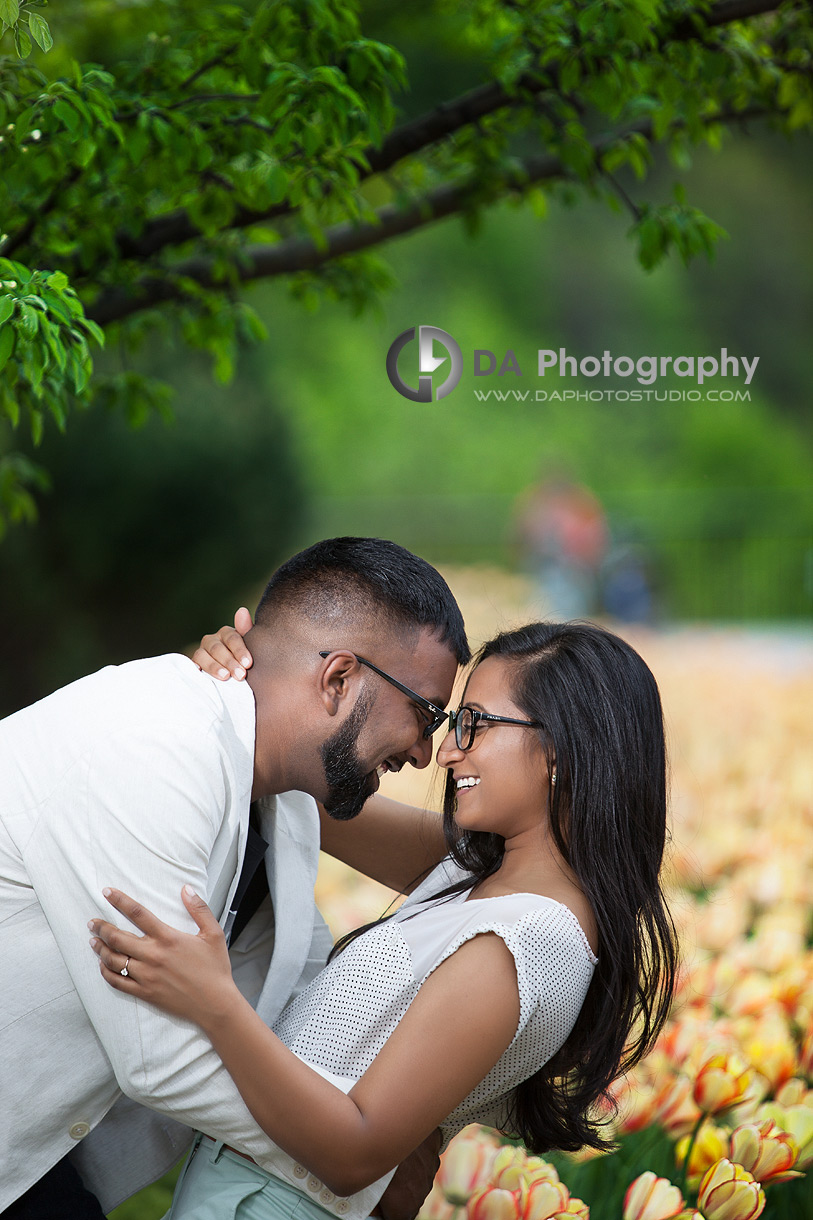 As a couple, Aneidah and Anson had about 20 location ideas for their photo shoot! They wanted to tie in the elements we all relate to the City of Ottawa. We took photos by the infamous tulip gardens and captured the city’s skyline in the background. There’s no need to get up-close and personal with landmark buildings to incorporate a city-feel. We were able to capture the best parts of those buildings while relaxing in a natural environment which gives the images a softer feel. 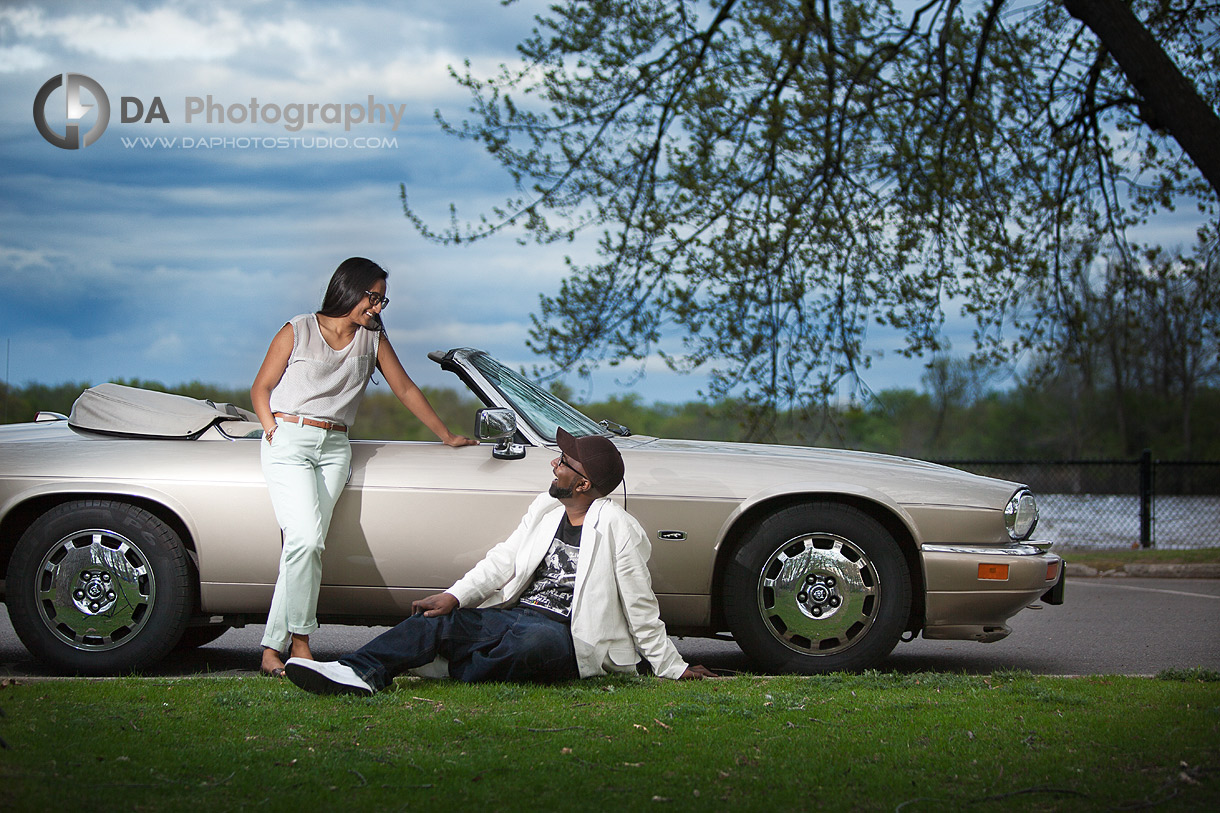 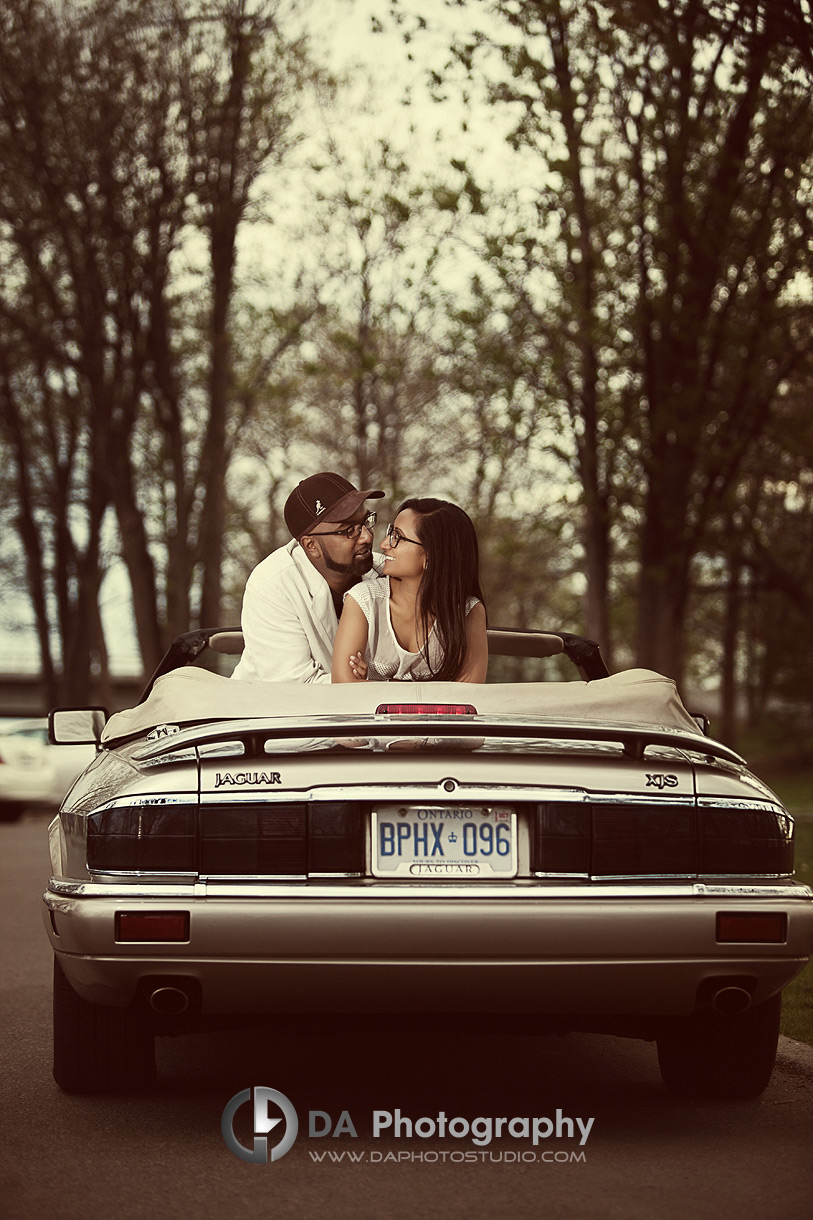 During our exploration, we found a bridge that lead to a lovely island just off the city. This island had a great park and served as a fantastic backdrop for some photos with the bride-to-be’s wedding gift from her fiancé – a new Jaguar. The weather was unseasonably cold for June and when the sun went down, we all felt the temperatures drop even more! But, the three of us committed and were determined to get a great photo of the couple on the Jaguar while the sun was setting behind them. It’s an image that I like to use in my marketing materials for my business — it’s a beautiful picture of a beautiful couple in a beautiful car! 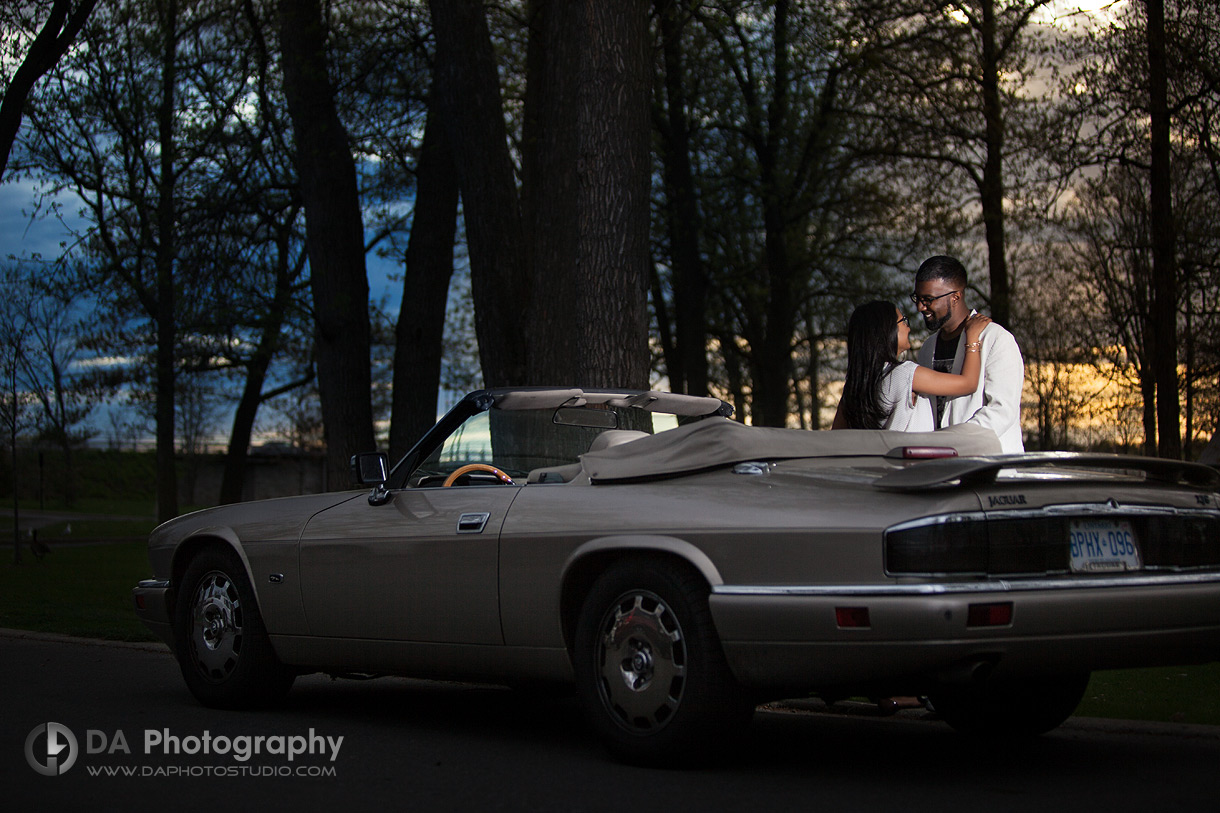 “A gift consists not in what is done or given, but in the intention of the giver or doer.” – Lucius Annaeus Seneca

My passion and biggest asset is taking the time to make every client comfortable and relaxed before I even pick up the camera. The result? Photos of you that actually look like you at your best! I can prove to you how much you can enjoy having your picture taken. Lifestyle photography is about the experience that happens to be served up along side of some great photos.

Specialties:
Family Photography for families that like to move around and enjoy their photo time, Wedding Photography for couples looking for a mixture of photojournalistic, contemporary and traditional images and Professional Corporate headshots that are far from cheesy and stiff.

This site uses Akismet to reduce spam. Learn how your comment data is processed.

Picture perfect for this wedding is understatement

When you plan your proposal so perfectly that even

From time to time there is "NO needs of wording to

Intimate engagement in my local wilderness and bea

When the angel look after them there is nothing th

When the world stop spinning there is "The Look" o

The beauty of outdoor wedding reception, white can

The image that become cover for the last edition o

When there is nothing more important than YOU!....

A true bride in the real sense of the word! Please

How should I act in front of the camera? Many time

DA Photography
4.9
Based on 34 reviews

Raymond Hussain
17:58 29 Apr 18
Amazing experience. Exceptional professionalism but even better person. Would not recommend anyone else, Dragi is the man!

Lauren Leon
00:55 13 Mar 18
Dragi is a fun, enthusiastic, and talented photographer and we were so happy to have him photograph our wedding. He took many great shots and the final product was excellent. He also kept our family and friends very entertained with his fantastic personality and high energy! We had a great experience working with Dragi – he offered helpful advice in our planning, was responsive and had quick turnover of photos, and overall provided us with a great variety of high quality pictures. We would definitely recommend DA Photography!

Ingrid Spence
15:43 26 Feb 18
Our recent on site corporate photo shoot with Dragi was a great success! The process from our first contact to the end result was exceptional. The professionalism and customer service was refreshing. He worked very hard to accommodate our every need. It was a pleasure to work with him and we love our photo's, best we have ever had. I would highly recommend DA Photo Studio to anyone looking to have high quality results. Thank you Dragi!

Kelley Law Office
02:01 13 Jan 18
Our experience is very good about Corporate Photography. Impressive Pictures. Waiting for the another functions to get their services again.

Eva Tomasz
01:23 07 Dec 17
Our wedding photos are simply stunning! I highly recommend DA Photography. Dragi and Jacqueline were easy to work with and made us & the entire bridal party feel comfortable. Extremely talented and I could not be happier with the results. Thank you for capturing our special day.

Jose Abdias Alas
20:57 07 Nov 17
Dragi is an amazing professional photographer, his work is amazing and is very attentive to details. I definitely recommend him. He shot our engagement photo session and the pictures turned out amazing even though it was a cloudy day and now I am looking to work with him for my wedding photography. He is very friendly and he does not take long to provide the final photos.

Patrick Leclair
21:15 31 Aug 17
Extremely satisfied by the quality of work, his attitude and the final product. We were a group of seven for family pictures as a 50th wedding anniversary gift for my parents. From the get go, Dragi was accomodating, he helped choose the location, spent over two hours with us in multiple settings and took over 200 poses for us to choose from. The entire time, he was fun, patient, made us feel comfortable and at ease in order to get the best pictures. A week later, the pictures were available on his website for us to choose. We ended up selecting digital prints as well as regular prints, they were all of great quality. His prices are quite reasonable and the service and quality of work is top notch. I would recommend DA Photography to anyone in the GTA. Thanks Dragi.

Nora Ryell
16:23 06 Mar 17
Hi, Dragi. I just wanted to say that I was very pleased with our photo shoot and the results. I've had many compliments about the pictures. And the experience was painless because of your professionalism and expertise. It was a smooth and collaborative experience from the shoot to the processing and to the final selection. Many thanks, Nora
Next Reviews